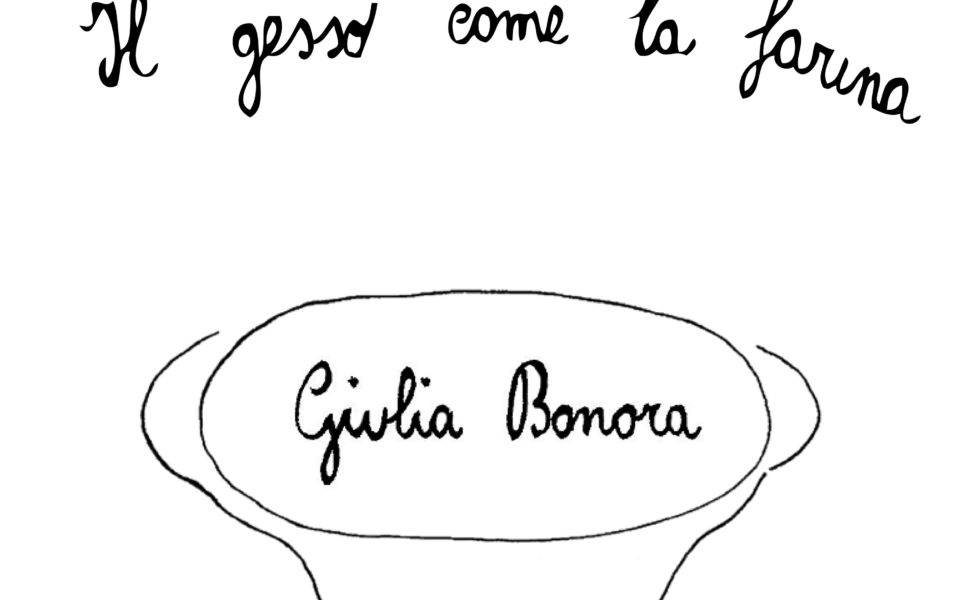 GALLLERIAPIÙ will host from October the project Plaster as flour by Giulia Bonora: an investigation on sculpture and design about food that starts with the development of the artistic process as a research method, main topic of her dissertation. Giulia lived the research as a part of her life. Living in the process meant for her going through each step, making it part of the paper.

Plaster as flour is a collection of experiences, voices, tracks, considerations between food and sculpture, born out of the desire to find a point of communion between the two worlds. By combining the materials of sculpture with cooking techniques and vice versa, Giulia traded real food with simulated one to mimic the known methods. Her personal experimentation led her to focus on new codes, trying to find a new definition of food.

The project will be developed in the gallery keeping the guidelines of her research, thus making the audience participate in the process itself: not a mere staging of the artist’s laboratory / kitchen but a real sharing of Giulia’s method through a live streaming that will allow to connect in real time the gallery with her workplace.

In addition to documenting the artistic process, the project is based on the many TV cooking shows: it will become a daily appointment with an unusual experience between art and cuisine. In the gallery on the monitor connected directly with the artist’s laboratory / kitchen you can watch episode after episode Giulia creating sculptures inspired by a cookbook of the ‘70s. The live streaming will alternate with three pilots: the sculptures produced in pilots will be exhibited in the gallery as a tangible result of the research. The project will be developed in eight live episodes and as many FAKE FOOD sculptures. FAKE because the link with reality lays only in the idea of ​​the food and in the interpretation of culinary processes. Food enters the realm of sculpture as a raw material and as a process, losing its main feature: edibility.

GALLLERIAPIÙ is the first gallery in Italy that has included in its program a specific section dedicated to food, promoting projects that reflect on the act of eating and cooking and relational happenings where food becomes a pretext to talk about something else.

Giulia Bonora (Ferrara, 1986) She graduated in Sculpture at the Academy of Fine Arts in Bologna in 2012, with an Erasmus program in 2011 at the University Aki in Enschede. Throughout her academic years, she took part into numerous workshops and she collaborated with many important institutions such as MAMbo in Bologna. Between 2009 and 2011 she was assistant of the artist Sissi. In 2014 she took part into the group show Biennale Giovani 3 curated by Renato Barilli and into the residency program SAC Mari tra le Mura organized by Fondazione Pino Pascali, Puglia. In 2013 she took part into What is the story? Building Marfisa, Ferrara; Play with food, Qubì, Turin; In forma di pane, Sessantotto/ventidue, Bologna. In 2012 she took part into Polaroid, Polaroid, Enschede, Netherlands. In 2011 she was invited to Symbiosis, XV Biennial of Young Artists of Europe and the Mediterranean, Thessaloniki. In 2010 she took part into the group show Here we are, il luogo è sempre specifico, PAC, Ferrara. She lives and works between Bologna and Ferrara.