I saw Gluklya’s work for the first time at the exhibition “All The World’s Futures” curated by Okwui Enwezor at the 56th Venice Biennale in 2015. The installation entitled “Clothes for the Demonstration against false election of Vladimir Putin” used items of clothing belonging to people of different social groups who took part in the protest, modified by the artist and mounted on wooden sticks. For years, Gluklya has used clothes in her art in different ways, in forms ranging from installation to performance; on that occasion, she decided to get out on the streets during the protests. We are not used to looking at clothes – and the relationships created through this medium of cultural expression – as representing a strategy of resistance, critical and material practice at the same time. For Gluklya, clothes demand respect: they are the things that represent us the most, they are the closest to our body, like a second skin, the border between society and personality, interior and exterior, a subtle frontier between narrative and reality, and (why not?) even a way to understand each other better. This dynamic, participatory and politically inspired research is also the leitmotif of the exhibition “Utopian Unemployment Union of Bologna”. Veronica Veronesi, Art Director GALLLERIAPIÙ

Radical thinking as practiced by Gluklya goes beyond the art world to address the subject of relations between different social groups as a strategy and critique of the system.

The Utopian Union is a concept she has already developed in different contexts and different countries. Each time the artist creates new spaces for interactive performance in search of new languages to help overcome cynicism and apathy.

This internationally renowned artist is going to lead workshops for GALLLERIAPIÙ, uniting people from different classes and resulting in an outdoor performance. The idea is to develop a new model of social structure in the form of a performance aiming to redefine the relationship between economics, art, and social policy. The Utopian Unemployment Union of Bologna is a critical space for promoting social innovation, where thought aims at becoming reality in a journey of exploration, toward territories of new heterotopias.

The idea behind the workshops is to create and develop a path toward self-propelled initiatives and self-determination, making it possible to escape rejection and exclusion. The goal of this experiment is to investigate the causes, not only social and economic, but also existential, of unemployment. It provides an occasion for reflection and exchange about the participants’ experiences and aspirations. Their individual capacities will be recognized and developed within the workshop and transformed into concrete ideas and projects.

By partnering with the Xenia Association for social promotion in the field of immigration and inclusion, and with the support of the Academy of Fine Arts of Bologna, a small group formed by migrants, refugees, and young students will establish a lab for creating a virtuous circle in which they can compare ideas, which will provide the subject for investigation and development.

In addition to the works produced during the workshop, Utopian Unemployment Union of Bologna will display a series of watercolor drawings, videos, performance documents, and an installation made in recent years to suggest the structured creative process led by Gluklya. This method encourages processes of self-organization, giving everybody equal status and allowing us to learn about the capacity of different minorities and marginal communities for coping with difficult life situations with the help of art.

Utopian Unemployment Union of Bologna is a new type of exhibition, including a workshop and a participatory performance that starts as a critical project and becomes a social project aimed at finding alternative solutions to problems related to immigration /integration.

Shortly after graduating from the Mukhina Academy of Art and Design, Gluklya co‐founded the artists’ collective The Factory of Found Clothes (FFC) with Olga Egorova (artist name Tsaplya). FFC uses installations, performance, video, text and ‘social research’ to develop the concept of ‘fragility,’ which is not ‘beauty’, but invisible strength, the ability to see things which can be easily destroyed by the complexity of life. The relationships between internal and external, always complex and dramatic, became the main theme of the FFC project. In 2002, Gluklya and Tsaplya wrote the manifesto: “The place of the artist is on the side of the weak”. This manifesto shows an important transformation of the artists’ understanding of the сhanging social and political context in Putin’s Russia. FFC worked together for more than 10 years and in 2012 Gluklya took over the leadership of the group. She is also a co‐founder of the Chto Delat? group and an active member since 2003.

Recently, she presented her ‘Garden of Vigilant Clothes’ at AKINCI, contributed to the Critical Mass Festival and the public program of Manifesta 10, and was part of the exhibition ‘All the World’s Futures’, curated by Okwui Enwezor, during the 56th Venice Biennale (2015). In 2014, Gluklya was awarded a fellowship in art by the Joseph Brodsky Memorial Fund. In 2013, she presented her solo show ‘Utopian Unions’ at the Museum of Modern Art Moscow.

Thanks to Galerie AKINCI, Amsterdam (The Netherlands) 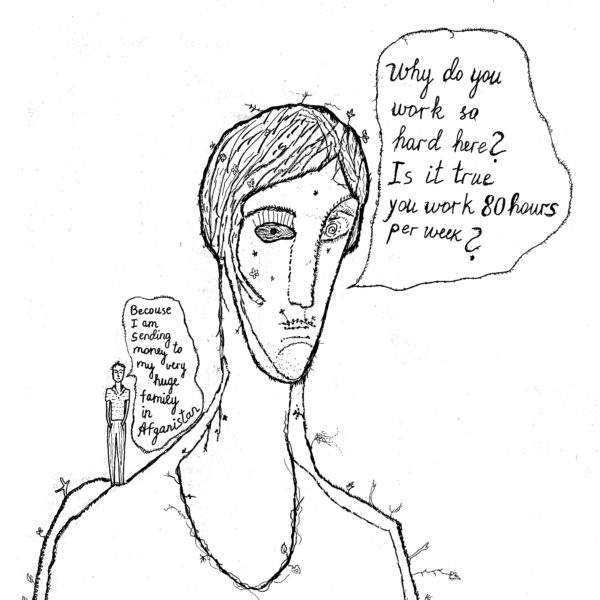