Well-balanced, rhythmical lines exert an influence on the masses, making them more rational, more organized, and strengthen their aspiration towards self-discipline.  (Varvara Stepanova)

GALLLERIAPIÙ presents the first project by Iulia Gabriela Toma and Claudiu Cobilanschi after their residency at MuseumsQuartier in Vienna in February 2016. The two Romanian artists, partners in life, decide to reveal their professional collaboration with a project that starts from the artistic research of Varvara Stepanova (1894-1958), Russian artist associated with the Constructivist movement, wife and collaborator of Alexander Rodchenko (1891-1956). An analysis both on the personal and on the professional side: Toma & Cobilanschi investigate the inner creativity universe of the couple Stepanova-Rodchenko, reinterpreting their path that marked the history of art. Toma & Cobilanschi’s research focuses on the Constructivist clothing design. Lines and angles, fields of colors and their relationship, surfaces and textures, dimensions and shapes reveal messages hidden into Stepanova’s  prodezodezhda (production/working clothing), spetsodezhda (clothing specialized for a specific occupation) and sportodezhda (sports costumes), at the base of the revolutionary idea of functionality over aesthetic in clothing and its production.  A series of new works comes out from the collaboration between the two artists: installations that transform textile in sculpture through ascension and descension movements – widespread in Constructivism -; textile collage of shape and abstraction, of shadows and flattened three-dimensionality; charcoal drawings as x-rays and studies on the composition. Two works complete the exhibition: a photographic tryptic where Iulia Gabriela Toma interprets her mother’s workout clothes as sport coach, wearing them like an emotional armor and a video where Claudiu Cobilanschi shows his attempt to communicate “with someone beyond the blue sky”, using a reflective fabric to signal his presence with a glint. With this project Toma & Cobilanschi question themselves and the audience at the same time: what was Varvara Stepanova hoping while designing functional clothing? Where is the big change yearned for by Constructivism? Where does Tatlin’s tower bring us? Renewing the Constructivist enthusiasm, finding again the will of progress, passing over the obsolete slogans. 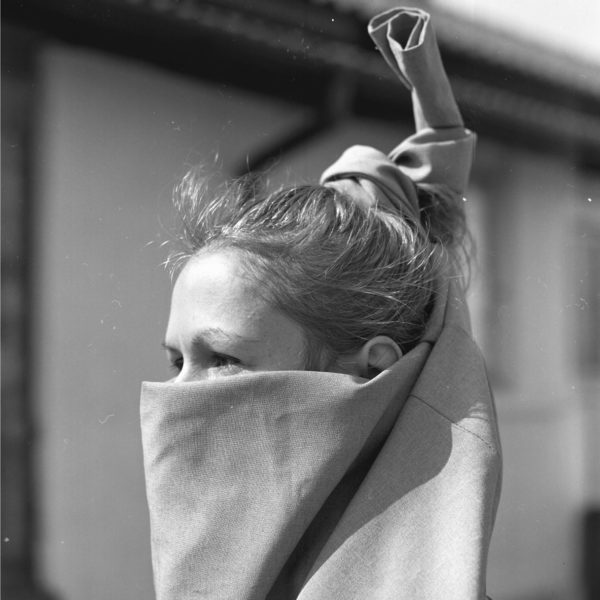