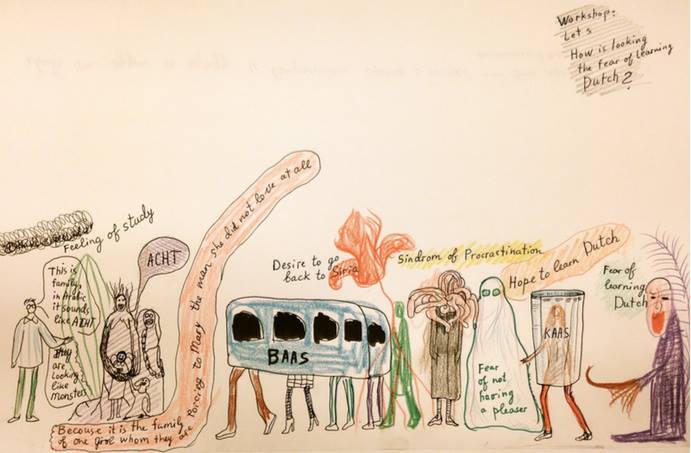 Join and walk with us, Gluklya and TAAK, in order to support refugees to express themselves and formulate their needs.

The Carnival of Oppressed Feelings is the final event of the project Utopian Unemployment Union of Amsterdam of Gluklya – a series of workshops and encounters with refugees living at the former Bijlmer Bajes. In this ‘protest’march, costumes and props will be shown, as a visualized personification of various topics and statements, noticed by Gluklya during her research and conversations with all involved parties. There will be representations of, for example, the system, fears, language barriers and the mental and physical effects of living in a former prison building.

The aim of the carnival is to connect different precarious and less precarious groups of the local cultural community with the refugees and social workers, following the principle of the Utopian Unemployment Union to unite people from different social backgrounds regardless the question of status.

The performance starts at the entrance of the refugee center (AZC Wenckebachweg 48). We march by foot and metro to different parts of the city, where capitalism is very visible and “anxiety” for refugees is felt. The carnival ends at Dam Square, where, Charles Esche, director of the Van Abbemuseum, will present the Refugee Manuscript, commonly written by involved organizations and refugees.

As preparation of the Carnival of Oppressed Feelings we developed the 5 Day Program. Please feel free to bring your input during these days as well.

Photo of the performance by Viktoria Ushkanova